November 25, 2015, Sydney, Australia – More borrowers are being encouraged to take advantage of some of the lowest home loan rates in history, following a new survey by one of Australia’s biggest comparison websites, finder.com.au, which found about two in five mortgage holders (39 percent) have not switched providers in the past decade – an estimated 1.17 million households.

By not switching home loans or asking for a discount with their current lender, these households are potentially wasting a combined $27.4 million per month, $328.2 million per year or a staggering $9.9 billion over 30 years. This was based on receiving just 0.10 percentage points off the national average mortgage size of $379,400 with the current average variable home loan rate of 5.20 percent according to finder.com.au/home-loans.

The survey of 1,351 respondents also found that just 6 percent of Australians are currently considering switching providers, while just 21 percent have switched for a better deal within the last five years.

More than half of these borrowers (54 percent) are content with their lender, while almost one in four (24 percent) hadn’t switched because they couldn’t find the time for all the paperwork. One in 10 found it too hard to compare products and 13 percent think it would cost too much. 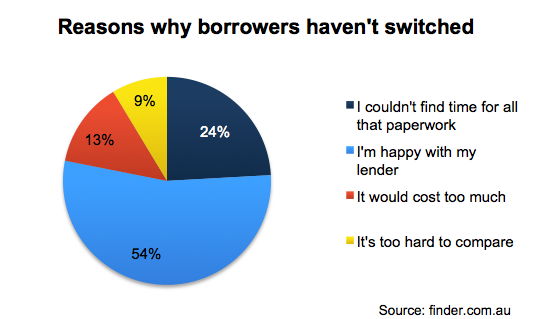 Comparing generations, Gen Y (18-34 year-olds) were the most savvy, more likely to have switched home loans than any other age group, while Baby Boomers (aged 55-74) were the most loyal to their lender.

finder.com.au Consumer Advocate, Bessie Hassan, says she was surprised by the complacency of many borrowers.

“It’s surprising that so many households aren’t taking advantage of the current home loan market. We’re seeing the cheapest home loan deals ever and it’s now more affordable to switch lenders since the banning of excessive exit fees to variable home loans in 2012.

“Despite this, refinanced loans represent 34 percent of all home loans financed, according to the Australian Bureau of Statistics Housing Finance data analysed by finder.com.au. That figure has fluctuated between 31 and 34 percent since the credit reforms were introduced in July 2012, which made it easier for variable rate borrowers to switch providers.

“The real concern is that people may be getting complacent and wasting money just by staying put. For instance, 24 per cent of borrowers who hadn’t switched said they couldn’t find the time to fill out paperwork, but isn’t a form worth the time and effort if it will mean over $8,000 in savings?

“By seeking a different deal and switching, you can potentially save yourself tens of thousands of dollars over the life of your loan, depending on your loan size and the discount you receive. It’s certainly worth the effort to compare what else is on the market, and you can do this by weighing up your options online.

“If you’re not entirely comfortable with switching lenders, speak with your current provider and ask them if there’s anything they can do to give you a better deal. Chances are you’ll end up with a discount, or at the very least have some fees waived, as an enticement to stick with them. If you don’t ask, you don’t get.”